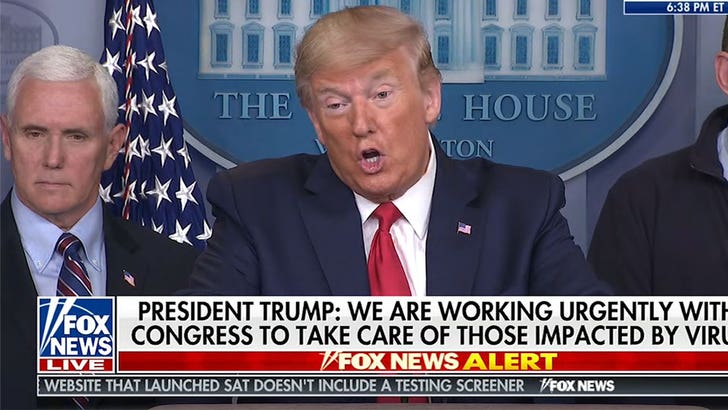 4:18 PM PT — It’s back to the drawing board in D.C. for Congress — with Senators failing to pass a stimulus package bill with a split vote of 47-47 Sunday … this after the House already sent a version of the bill along and suspended their session in hopes the Senate could get it done.

Welp, amid fears of U.S. Representatives having to come back to D.C. to draft up a new bill and take a new vote again … President Trump offered up a temporary remedy for everyone scared of catching coronavirus. During Sunday’s press briefing, he said his administration wouldn’t be opposed to let people work from home … as in vote.

The question was lobbed to the Prez in the wake of Rand Paul and others quarantining after Paul’s coronavirus diagnosis, and DT said it straight up — he’d be cool with a temporary measure of voting remotely, not necessarily needing bodies in D.C. to do it.

That would solve the quorum problem for House members, a good amount of whom would have to be back in D.C. otherwise in order to get any official business done.

Unclear if Trump and his administration would have the final say over this — it’s probably a resolution that’d have to be written in Congress and voted on — but it doesn’t sound like he’d make a big fuss if both houses decided to go this route. Desperate times …

There is a quiet panic going around behind the scenes at the House of Representatives because some members tell TMZ they sounded a warning 3 weeks ago about the Capitol being unsafe but they weren’t heeded … and now some fear they have the coronavirus.

The members we spoke with — who only wanted to talk on background — tell us, about 3 weeks ago when the problems associated with coronavirus started blowing up they began talking about limiting or excluding visitors from the Capitol.

It was an especially busy time, because the House was putting together spending bills and people were flying in from all over the country to lobby members. There were also lots of visitors who came by and interacted with a number of members. We’re told the hallways were packed.

One congressman told us, “No one took this seriously. Leaders from both sides initially said they didn’t want to panic people. We’re told the leaders ultimately consulted the Congressional doctor, but as one congressman said, “He was scared to make a decision because he was afraid he would trigger a national panic.”

A congressman we spoke with says he believes he has the virus and is exhibiting mild symptoms and he has self-quarantined. He also says, “I think lots of us [representatives] are going to get it.”

The House is currently not in session, but there’s a big problem. The Senate is in session and is hopefully going to pass a relief bill soon. The House members have gone home, and the only way they can approve the bill without flying to D.C. is if the vote is unanimous.

If one member wants to vote no on the bill, the traditional solution would be for members to fly to D.C. to cast their votes. But, putting 435 people on airplanes — especially when there’s fear some of the members have or were exposed to the virus — it’s super risky. We’re told there’s talk of flying 40 at a time or figuring out some way of keeping people away from each other.

No decisions have been made on what to do if the vote is not unanimous.

As for the other chamber … as we reported, Senator Rand Paul has tested positive and incredibly he was at the Senate gym today swimming. The fact the Senate gym is open when gyms across the country have closed because a gym is a breeding ground for the virus ….well, it’s just baffling.

[ad_1] Breaking News 9:09 PM PT — Amanda has since removed the ultrasound pic. Amanda Bynes says she’s got a baby on board … and she wants the world to get the first glimpse of her upcoming bundle of joy. Bynes stunned fans Tuesday when she posted a pic of an ultrasound with the caption,…

[ad_1] Exclusive Getty/trumppalace.com Composite One of President Trump‘s older sisters sprung a leak in her fancy NYC condo, which messed up her neighbor’s place to the tune of nearly $400k … according to a new lawsuit filed against her. Elizabeth Trump Grau has a pad in NYC’s Trump Palace, and back in March of 2017…

[ad_1] Equinox may be locked up tight as a drum right now, but it’s not stopping the fitness chain from offering advice on how to stay sane and even calm during the coronavirus crisis — have lots of sex in different configurations … depending on your circumstances. Honchos at the gym have rolled out their…

[ad_1] We love these products, and we hope you do too. E! has affiliate relationships, so we may get a small share of the revenue from your purchases. Items are sold by the retailer, not E!…. [ad_2] Source link