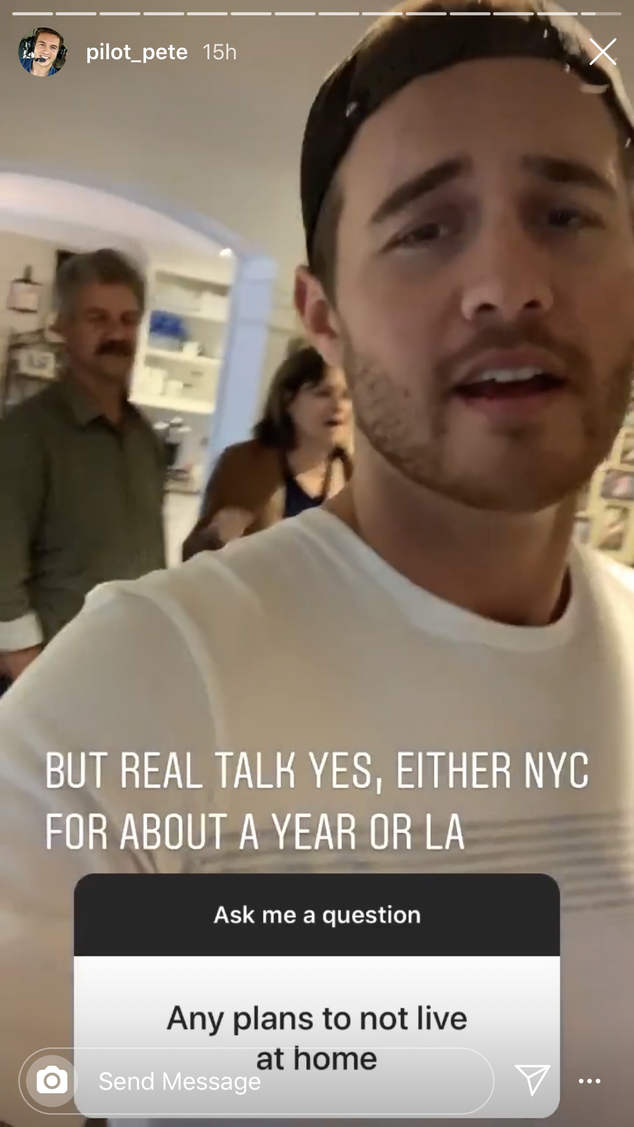 Pilot Pete is packing his bags.

The Bachelor star Peter Weber invited fans on Instagram to ask him their most burning questions during a Q&A session on Friday.

Fans asked Peter about his favorite movie of all-time (Top Gun), his favorite karaoke song, his favorite food (Cuban food, of course), his favorite place to fly, among other things—but the juiciest question of all came from a fan asking if he had “any plans to not live at home.”

To which the 28-year-old responded by belting out “I’m Leaving on a Jet Plane” by John Denver in a video with his mom and dad in the background.

He also wrote, “But real talk yes, either NYC for about a year or LA.”

“Don’t let the door hit you on the way out!” the Bachelor star’s dad joked in the background. His mom Barbara said, “We’re empty nesters!”

If you’re wondering why the infamous Bachelor still lives with his parents, then let us refresh your memory.

Ahead of their son’s debut as the star of The Bachelor, Pete’s parents were guests on the Bachelor Party podcast.

During the episode, Pete’s mom shared that their whole family still lives under the same roof because they’re “very close” and “we support each other in every which way, and we’re each other’s best friends, not just parents.”

She added, “People forget: I’m Cuban, OK…In old time Cuba, the kids would be at home and in their 20s they would get married, and they would still live at home. They would have children, and the grandparents…it was one big happy family. Everybody living at home, so contrary to what a lot of people say like, can’t wait to get rid of the kids…our culture is a little bit different, and not that one is right and one is wrong, we want to keep that family tie, that unity together. And that’s one of the reasons that Peter and my other son Jack are still living at home, because there’s no reason really to move out.”

But cultural norms aside, Pete’s mother also shared that it’s “best to save your money” and invest in buying his own home down the road.

“Responsibly, he can do it, but I’m just looking for the right place for him when we do decide that he’s going to take that step…but we’re very happy living at home, everybody together,” she added.

[ad_1] Bella Hadidis using her celebrity status and a burrito as a way to inform people of the importance of social distancing as the coronavirus continues to spread.  Multiple celebrities have shared their own messages of encouragement on social media, but Bella is taking things up a notch with her Instagram photo. The model took…

[ad_1] Breaking News FBI agents say they nailed a coronavirus snake oil salesman — a SoCal man who allegedly claimed he had a cure, and used Magic Johnson‘s name to try to snare investors. Ya just knew this was bound to happen … the FBI arrested Keith Lawrence Middlebrook Wednesday evening in an undercover sting….

[ad_1] In the famous words of Ron Burgundy: Well, that escalated quickly. Believe it or not but The Bachelor finale started last Monday with everyone talking about Madison Prewett‘s shocking departure from the ABC dating show. The 23-year-old star decided it was best if she left Peter Weber after feeling like they weren’t on the same page….

[ad_1] If there is one person who is super lucky, it’s Rob Kardashian The Keeping Up With the Kardashians star isn’t just lucky for being born on St. Patrick’s Day either, he’s also lucky to have been blessed with his adorable daughter, Dream. Rob and his ex Blac Chyna have the cutest little girl, who just adds…

[ad_1] Savannah Guthrie is going for the gold. The TODAY news anchor, who is co-anchoring from home as she recovers from a sore throat, caught up with Hoda Kotb during Wednesday’s episode and joked that she’s learned a special skill during her social distancing. “Our producer, Jen, asked me if I have gotten any news skills…and I said, ‘No, except for I…